Kevin James is returning to his old Monday night gig on CBS, where he became a star with The King of Queens. This time it’s with Kevin Can Wait, a multi-camera sitcom that had gotten a straight-to-series order and certainly shares some KoQ DNA. The first look at the sitcom from Sony TV and CBS TV Studios dropped today during CBS’ upfront in New York.
Read more…

Sony Pictures Television i/a/w CBS Television Studios i/a/w Hey Eddie Prods.
Kevin James returns to series television in an irresistible comedy about a newly retired police officer looking forward to quality time with his family—and his fellow retired cops. When his oldest daughter announces she’s dropping out of college to support her fiancé, Kevin knows his only choice is to move them both into his home to keep her in school.
Read More…

CBS has given an official series order to Kevin James’ new comedy “Kevin Can Wait.” The previously untitled project from CBS Television Studios and Sony Pictures Television had already received a production commitment for the 2016-17 season from the network.
Read more…

CBS is pushing comedy in the 2016-2017 season. The network has slotted Kevin James’ comedy “Kevin Can Wait” on Mondays in the post-“Big Bang Theory” timeslot.

The network announced their 2016-2017 schedule Wednesday morning, ahead of their upfront presentation, which will be held at Carnegie Hall later in the day..
Read more… 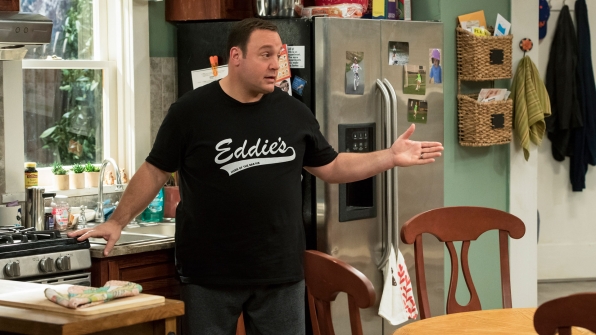 Kevin James returns to series television in an irresistible comedy about a newly retired police officer looking forward to quality time with his family—and his fellow retired cops.
Read more…